”This is a significant result, and politicians should take careful note of it. A substantial majority of Finns do not accept fur farming in its current form. For example, 38 per cent of respondents said that fur farming should only be allowed to continue if animals are given considerably more space and possibilities for species-appropriate behaviour. Inscribing these kinds of animal welfare standards into law has ended fur farming elsewhere, because it is no longer profitable. This has happened with mink farming in Germany, and with fox farming in Sweden, for example. We have to join this European-wide development and phase out fur farming. People in Finland do not want their country to end up being the last European country where animals are farmed and killed just for their fur,” says Heidi Kivekäs, Executive Director of Animalia.

Separate survey on the justification of killing

Requested by Animalia and Oikeutta eläimille, Taloustutkimus conducted another survey with a different sample group. In this survey, fur farming was not presented primarily as a business, or through other positive images. Instead, the survey presented a claim to measure people’s opinion on the ethical justifications of fur farming. The claim was: “It is acceptable to kill farmed animals for their fur.”

The answer to this ethically fundamental question about killing animals was clear: 60 per cent of Finns answered that they partly or fully disagree, that is, they think it is wrong to kill animals for their fur. Only 35 per cent of the respondents fully or partly accepted this claim.

”When people are asked whether it is right to kill animals for their fur, most answer no. The footage from Finnish fur farms that has been in the media, both in Finland and abroad, places Finland in a questionable light. People here and elsewhere know that animals on fur farms do not have a good life. That knowledge is reflected in these answers,” says Kristo Muurimaa, Campaign and Communications Manager of Oikeutta eläimille.

Members of the international Fur Free Alliance have commissioned similar surveys. For example, in Estonia 69 per cent, in Sweden 78 per cent, in Norway 68 per cent and in Denmark 55 per cent of people think that it is wrong to kill animals for their fur.

The survey was ordered in October 2019 by Animalia and Oikeutta eläimille, the two Finnish member organisations of the Fur Free Alliance. The survey questions were asked from two sample groups on two separate occasions, during a Taloustutkimus Telebus phone survey. The first survey was conducted between 30 October and 5 November, 2019, with a sample of 1004 people. The second survey was conducted between 11-19 November, 2019, with a sample of 1002 people. The target group was Finnish residents between 15 and 79 years of age, excluding the Province of Åland. 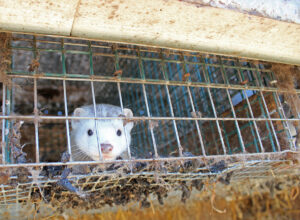